Authentic Ayurveda on the beach helps you regain your health.

In a serene entrance pavilion, you are greeted with the perfume of frangipani and a traditional “Ayubowan – May you have a long life”. In a breathtaking location overlooking the Indian Ocean, you are taking the first steps discovering the quiet elegance of Barberyn Beach – and the Ayurveda way of life.

Contemporary architecture blends beautifully with indigenous design to create a feeling of space and light, letting in nature – so guests can better enjoy the healing that comes from within.

Clusters of rooms stand on stilts, in the lush valley, sloping down to the sea. All the rooms have balconies and are connected by corridors. Ramps help guests walk from the accommodation to the main service building and the health centre. The ramps ensure wheelchair access.

All resort buildings, restaurants and guest rooms are built against the hillside, facing the Indian Ocean, with panoramic views of the garden and the sea.

At the highest point on the land, where Barberyn Beach Ayurveda Resort is located, an open entrance pavilion looks over the grounds, towards the sea. The pavilion is a place for our guests to gather and listen to music, particularly as the evening gives way to the night, and stars light the huge skies. 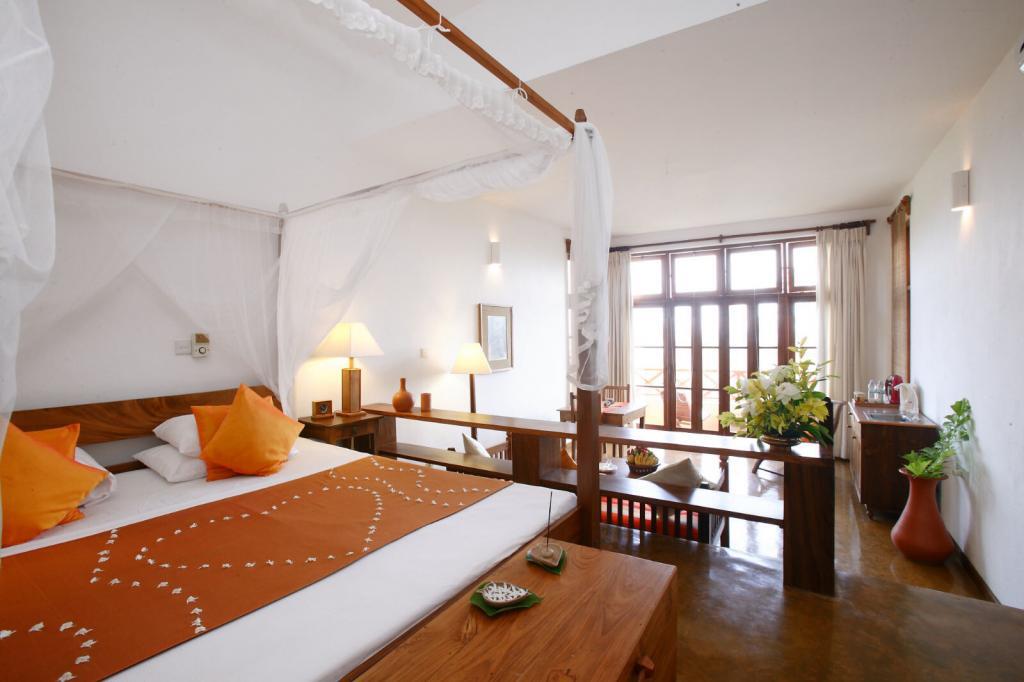 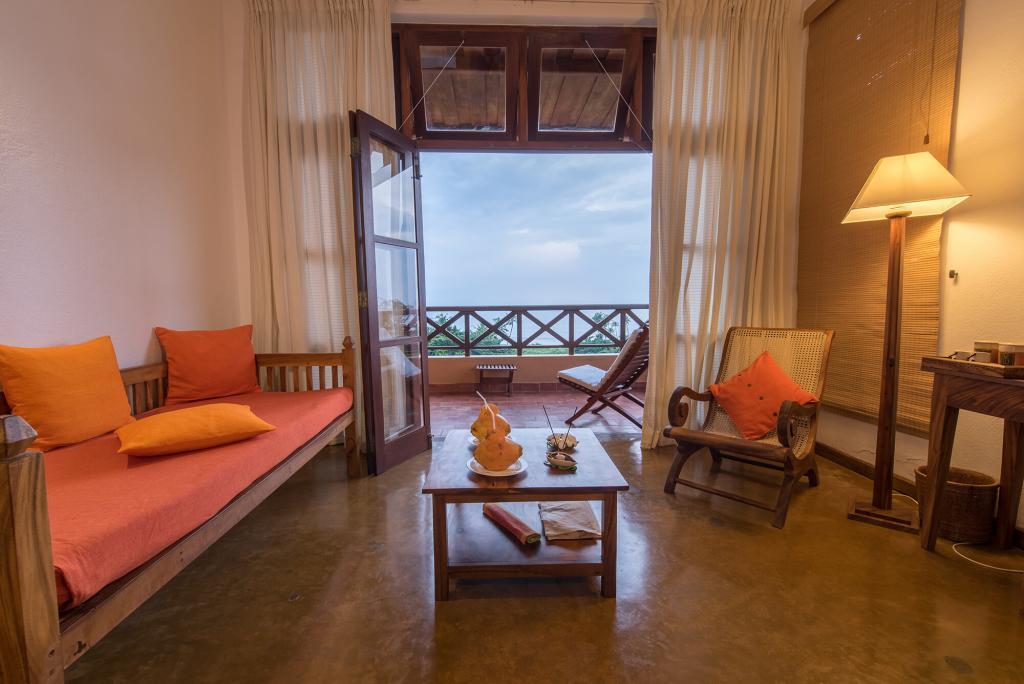 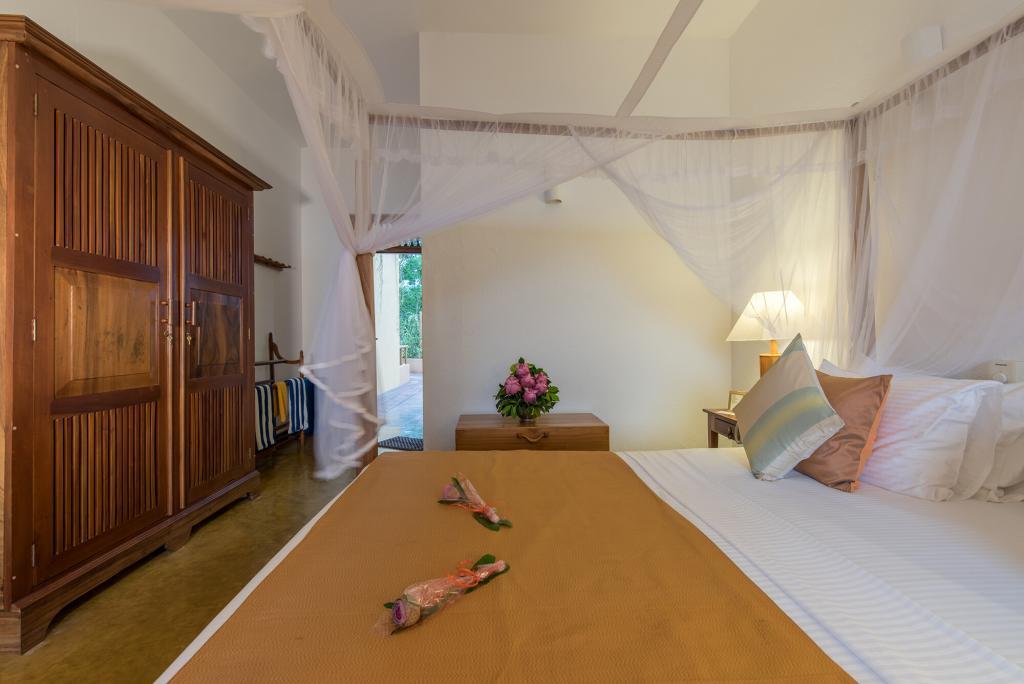 Ayurveda has become a household name with all those interested […]

Barberyn Beach provides all the facilities needed to make your Ayurveda holiday comfortable and enjoyable. It is a beautiful and elegant resort, built in a way that guests can enjoy the feeling of space and light, the sounds of nature and the huge night skies.

There are no television sets or radios in any of the rooms. You can hear the sounds of soft chanting from scriptures in the morning and evening, as you pass the entrance pavilion. There is soothing music at the health centre. If you want, you can watch television, view videos or listen to music in the conference centre. For those who seek solitude and rest, the extensive resort grounds with its lush vegetation and variety of birds provide the ideal backdrop. Those who like company find warmth and friendship amongst fellow guests who quickly absorb the caring nature of the staff.

Following are some of the facilities and services at the resort.

“Best health resort I have been to, I have been twice now to this resort and highly recommend it. The treatments are tailor made and are wonderful.”

Barberyn Beach –
the Architecture & the Landscape

The architects of Barberyn Beach Ayurveda Resort provided the following comments on the selection of the building site:

“The chosen site is ideally located on a small hill overlooking the sea, gradually sloping towards the beach. It has an extraordinary view on its southern boundary. Visitors to the hotel approach the zenith of the site, which slopes down to the sea, flanked by two beautiful verdant valleys on the east and west. There is a secluded beach at the end of the eastern valley. On the west, activities such as stilt fishing can be observed. Walking and jogging can be done on this stretch of beach as well.”

Three architects contributed to the design and construction of Barberyn Beach, working closely with the owners who wanted to extend the same concept as its sister resort, Barberyn Reef. The architects all brought their unique qualities to the project. They had a common understanding that the barriers between interior and exterior should be minimal, and that the harmony between building and site should be maintained. All of them took care not to disturb the existing vegetation of the site. They used natural local material wherever possible. The result of this joint endeavor is the unique architecture of Barberyn Beach.

The extensive grounds of Barberyn Beach Ayurveda Resort, the verdant valley and the unspoiled coastline create a feeling of space where life slows down to allow the visitor to absorb what nature bestowed.

Still and moving water brings the watering hole into focus. It attracts local bird life as well as butterflies. It is also a water reservoir for the garden. The salt-water swimming pool overlooks the ocean. Guests enjoy yoga sessions and practice at sunrise and sundown.

Food is an important aspect of any vacation. The Barberyn chefs and the Ayurveda health centre work closely together to bring you a variety of wholesome and delicious meals. You’ll be amazed how good Ayurvedic food tastes.

Food is an integral part of Ayurveda therapy. Guests use their time at Barberyn to get to know the links between food and health, and their own unique system of digestion. Doctors are always ready to explain what type of vegetables and fruits to have – and which to avoid. While taking herbal medicine, it is important to abide by the Ayurveda doctors’ advice.

The dining room enjoys a prime location on the fourth floor of the main building, with views of the verdant trees and ocean on one side and the distant hills on the other. The building has a lift and connects to the accommodation buildings through wide ramps providing wheelchair access. The dining room is open on both sides. Guests linger over meals, enjoy the views and listen to the calls of the birds.

The day starts with tropical fresh fruit and fruit juices, herbal and Sri Lankan black tea, yoghurt, eastern and western bread, as well as traditional breads and yams and nourishing congee with different kinds of leaves – “the green soup” (it also aids digestion).

The highlight of the lunch buffet is a range of vegetables, cooked in different ways, and fresh fish, followed by fruit, curd (similar to yogurt) and treacle. There is also dessert for all those who are not watching their weight.

Dinner is a set meal: soup, or entree, main course and dessert. Guests can select to have the vegetarian main course or the fish option.

Saturday evening is “Sri Lanka night”. Wonderful Sri Lankan food – some of it cooked right at the buffet table – and oriental music, played by a group of traditional musicians.

Spiritual practices have always been central to the lifestyles of […]

Ayurveda and Yoga come from the same philosophical matrix. They […]

Enjoy the contemporary collection of hand crafted jewellery with sterling […]

Our “Oriental Collection” shop presents beautiful traditional products made by […]

Barberyn Beach Ayurveda Resort is located on the southern tip of Sri Lanka, near the village of Weligama, 140 km south of Colombo.

Barberyn Ayurveda Resorts are the pioneers of Ayurvedic tourism in Sri Lanka and founders of the first Ayurveda resort ever, in 1984.

Barberyn Beach Ayurveda Resort arranges short excursions to places of interests on most afternoons during the week. These excursions are free of charge to resident guests.

Currently, the following tours are available at the resort:

Weligama is situated at the southern tip of Sri Lanka, about 15 miles (24 km) from the historic city of Galle. Half an hour’s drive, along the scenic coastal route, brings you to Galle.

Weligama itself is known for its beautiful sun-drenched beaches – and the spectacular sight of stilt fishermen, whom you will not find anywhere else on the island.

The stilt fishermen have a unique style of fishing: it involves casting their lines from a perch on a sturdy pole, 20-50 meters out into the sea. Nobody knows how or why they created this unusual technique, but it seems to work. The stilts are passed on from generation to generation, and they are jealously guarded.

Weligama has a long history. The famous Kustarajagala is a rock carving, depicting a Bodhisatva (potential Buddha) Avalokitheswara. The rock carving dates back some 1500 years, and is surrounded in myth and legend.

Our guests can also arrange the following special day trips from the resort, for an extra charge.

Described as the “little Sigiriya”, Mulkirigala consists of a series of rock monasteries carved out of the face of a huge outcrop, built during the 2nd century BC.

It is a mixture of religious and secular (non-religious) paintings and sculptures, with several reclining Buddhas among them. The beautiful paintings are based on stories connected with the past lives of the Buddha.

Mulkirigala is located in the South East of Sri Lanka. It is a major eco-tourism destination. The game park is famous for its elephants, water buffalo, monitor lizards, sambar dear and the occasional leopard. It is also an exciting location for bird watching enthusiasts.

The “Lonely Planet” guide book states that the park “rivals the fauna reserves of Africa”. The park’s 30,821 hectares are located around the large Udawalawe Reservoir, which is fed by the Walawe river.

Contemporary architecture blends beautifully with indigenous design to create a feeling of space and light, letting in nature – so guests can better enjoy the healing that comes from within.

Please fill out this form to make an inquiry or contact reservations@barberynresorts.com for a stay at Barberyn Beach Ayurveda Resort.

Room rate and the the Ayurveda treatment covers…

The combined price of the room rate and the Ayurveda treatment covers the following: